The third Bliss chronometer I acquired. This chronometer is mounted in its original mahogany three-tier box, which is 7 in. deep by 7 in. wide by 7-1/4 in. high. The top lid was missing, and was replaced and the box refinished by Gary Sellick of Ships Clock Cabinetry, who did a great job of the restoration. Gary also made a replacement key for the box lock. The ivory label is a replacement, with an error on the maker's name (says John Bliss & Co., rather than John Bliss & Son). The winding key appears to be original.

This chronometer was made in the short period between the dissolution of Bliss & Creighton in 1853, and the elder John Bliss's death in 1857. It has the Bliss & Creighton balance, patented in 1845 (patent #4135). The only difference between this balance and my Bliss & Creighton # 2076 is this has round compensation weights, whereas the B&C has wedge shaped weights. Creighton & Black, who also used the patent balance after the dissolution, continued to use wedge shaped weights on their balances. A testimonial letter (see below) in later John Bliss & Co. catalogs concerning John Bliss & Son chronometer 2485, the next one after this, indicates that no. 2485 was rated in New York Feb. 16, 1856. Chronometers were usually allowed to settle in for up to a year before being sold, so my no. 2484 was almost certainly made in 1855, and probably sold in 1856.

This chronometer was acquired, probably new, by the US Navy, and was included in a trial of repaired Navy chronometers conducted at the Naval Observatory in Washington DC from January to July of 1888. It tested better than all 8 new Bliss chronometers that were being tested for purchase at the same time, and better than two-thirds of all the new chronometers in the purchase trial that year.

The missing original lid indicates the chronometer was used by the Navy in World War II, as they often removed the top lid to make it easier to read the instrument, and to fit the 3 chronometer compartments used on capital ships. Chronometers used in the Navy in WWII also had instruction labels applied to the back of the middle tier of the box. I have replaced that metal label, which I assume was removed when the box was refinished. It shows how to cork the balance wheel for transport. I replaced it because I think it's important to recognize this mid-nineteeth century instrument contributed to the war effort in the greatest conflict the United States ever fought. 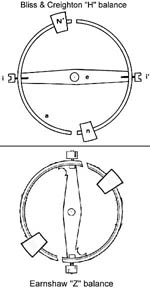 This chronometer has the "H" shaped balance (as opposed to the standard Earnshaw "Z" balance) patented by John Bliss & Frederick Creighton in August of 1945. Physically this resembles the modern "Integral" balance, but the materials used are different, so the operation is not the same. The patent, #4135 dated Aug. 4, 1845, was probably at least one subject of the lawsuit between the former partners after they split up. Both of the successor firms, Creighton & Black and John Bliss & Son, used the balance in their chronometers. In addition to the "H" shape of the balance, designed to correct for middle temperature error, the patent also had a claim for "the application of a second balance spring above, below, or inside the single balance spring heretofore in use...to insure a more equal rate of going..." by averaging out any physical inequalities in the two springs. This second claim did not deal with the middle temperature error, and may never have been fitted to any chronometers. Most Bliss & Creighton chronometers I've seen from SN#1036 onward have the "H" balance, but I've never seen the double balance spring.

Testimonial for John Bliss & Son chronometer no. 2485 from the 1877 edition of the Abridgment of the Nautical Almanac and Tide Tables published by John Bliss & Co.:

Gentlemen: I desire to add my name to the large number of those who have borne witness to the superior performance of your Chronometers, by testifying to the running of Chronometer J.B.&S., No. 2485, used by me on board the steamship Tennessee, during her five last trips.

Below I give you a copy of your rates which I have invariably found correct:

I would add here that two years ago I used a Chronometer of your make, which I think was quite as good as the above.