The distance a ship travels, as measured by the log, is an essential element of "Dead Reckoning," how a navigator keeps track of the vessel's position. At sea, distances are usually measured in "Nautical Miles". A nautical mile is defined as one minute of latitude. This works out to about 6,076 feet, which is longer than the statute (land) mile of 5,280 feet. Practically, a speed of 10 nautical miles per hour (knots) is equivalent to 11.5 miles per hour on land.

The first logs had a triangular piece of wood attached to a line with knots tied in it. When cast over the stern, the number of knots that ran out in a given time indicated the speed in nautical miles per hour, hence the term "Knots." Casting the log every few hours allowed the navigator to average the speed, and calculate the distance traveled.

Around 1800, the first practical mechanical log was patented. It had a spinner which drove dials through a clockwork mechanism indicating distance, and became known as a patent log. Everything was contained in one unit, which was towed astern on a line, and had to be hauled in every watch to read the register.

John Bliss & Co. made the first mechanical log that separated the spinner and the distance register, allowing the log to be read at any time. However, they did not invent or patent it, as suggested by some authorities. The Taffrail Log, as it's called, was invented by Capt. Truman Hotchkiss, of Stratford CT, and patented by him in 1864. He patented an improved thrust bearing in 1867. I haven't been able to determine when the Bliss Co. acquired the rights and began manufacturing the logs, but some of the company's early catalogs also credit Capt. Hotchkiss with the invention. See the example in Brewington's catalog of Navigating Instruments in the collection of the Peabody Museum, Salem MA. Bliss patents were issued to John and George H. Bliss.

In all, six patents were issued for the Bliss Taffrail Log. They are:

The very first version of this log is pretty much as described by Hotchkiss in his patent. It has a round, rather than tubular, register. I have only seen one example of this log, in the collection of the Peabody Essex Museum in Salem, Massachusetts, and described in M.V. Brewington's book "The Peabody Museum Collection of Navigating Instruments", 1963. It's museum no. M3028, and is shown on plate XLI in the book. The fish shown in the book is a later Bliss fish, but the original, as shown in the patent, is in the box in the museum.

Patent images for the first version of the Bliss Taffrail Log. 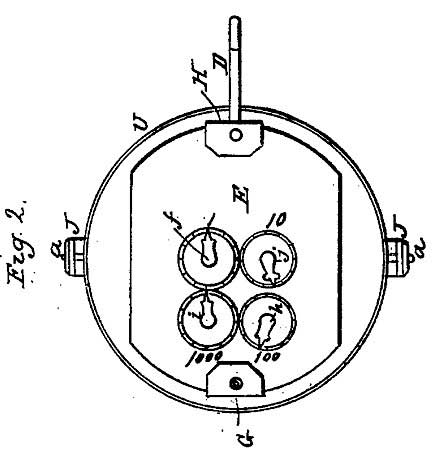 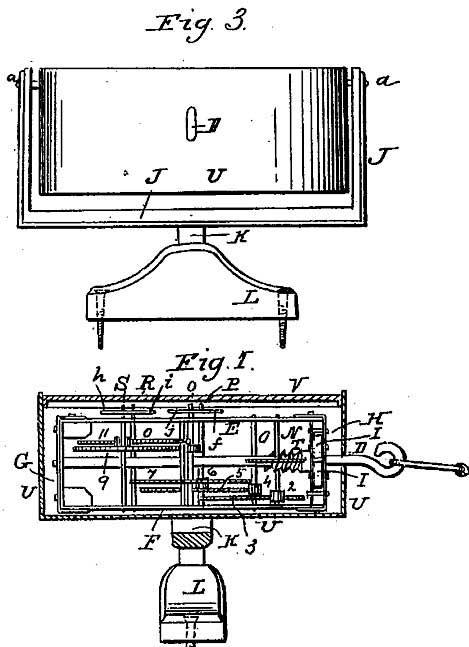 The second signature shows patent dates of 1876, 1878, and the two 1885 dates, so it must have been made between 1885 and 1893. As stated above, my example of this has been donated to the Schooner Virginia for navigational training.

The third signature was probably made after 1902, as it has no patent dates. I only have the register for my example of this log. This particular example is interesting because it has a brass label showing that it measures the shorter statute, or land, mile, rather than nautical miles normally used in navigation. I have seen several so labeled (with and without patent dates). They were probably used for inland navigation. I have seen a Bliss statute mile log that was used on a Great Lakes vessel.

Several sources indicate that the adjustable spinner (patent 331,369) permitted readings in either nautical or statute miles. This is not true; the gearing in the register determines which mile is measured. The adjustable spinner was designed to correct for variations caused by hull shape and wake pattern.

John Bliss & Co. later brought out improved logs, known as the "STAR" and "DOUBLE STAR" followed by the "MARK II" intended for high speed steamships. The older log was then advertised as suitable for "Sailing vessels and Steamers of moderate speed."

The "STAR" had an odometer (digital) readout, and the "DOUBLE STAR" had three dials: a dial reading in tenths of a mile, the main dial reading 0-100 in 1 mi. increments, and a second small dial reading 0-1000 mi. in 100 mile increments. The BLISS MARK II SHIP LOG is the last Bliss taffrail log that I'm aware of, and is similar to the DOUBLE STAR except that it doesn't have the small 0-1000 mi. dial. These all had a wheel governor, and a fish with a weight several feet in front of it. The governor served as a flywheel to smooth out the rotation of the line, and the weight served to keep the "fish" from jumping out of the water at speed. These modifications allowed use of these logs with high speed steamships. My MARK II lacks all but the register (dial unit), and appears to be unused. 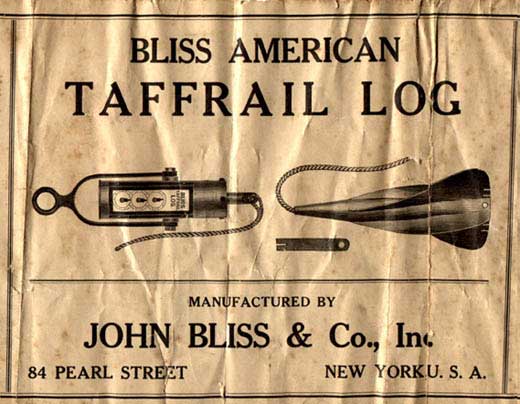