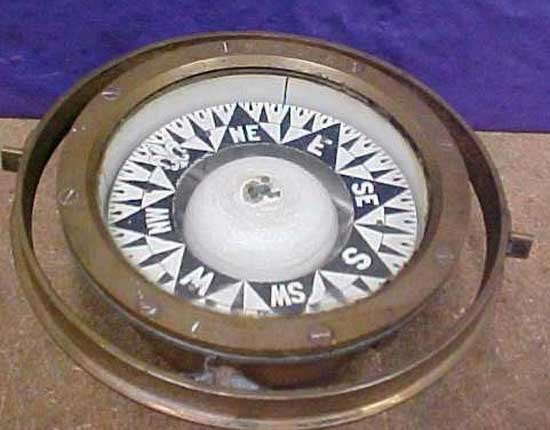 The English physicist William Thompson (Lord Kelvin) perfected a practical system of compensating compasses for the deviation caused the magnetic field of iron ships. In 1887 he wrote a letter appointing John Bliss & Co. his sole agents in America. In the same letter he certified that John L. Bliss (grandson of the original John Bliss) was "well acquainted with my practical methods for the adjustment of my compass, and understands the scientific principles upon which they are founded."

In addition to being sole American agents and manufacturers of his equipment, they also made compasses of their own design, and received two patents, both dated May 24, 1870, for improvements to compasses. This standard design liquid (spirit) compass was offered by them for many years. It is their No. 63, 5.24" card, divided to half points, and 8.3" overall, and sold for $29.00 in 1909. This compass has a dimple ground in the center of the cover glass right over the card pivot to accept a bearing bar like this one in my collection.